Just added to your cart

Mycorrhizae are fungi that live in a symbiotic relationship with plants in which energy and nutrient exchange benefit both organisms. The relationship results in improved survival and growth, increased rooting amidst more efficient soil structure, and bio-balance pathogens or other plant species. It is thought that as many as 90% of vascular land plants participate in such a relationship; many could not survive on their own. 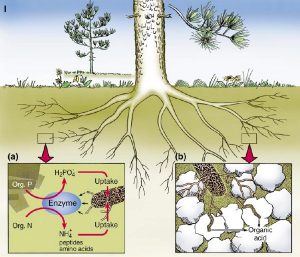 Why do Mycorrhizae and Plants Co-Exist?

Mycorrhizal fungi live on the roots of the plant and either physically enter or surround the roots. Here they generate a network of filaments among multiple species of plants, soil bacteria, and other fungi. Mycorrhizae provide additional surface area for nutrient and water uptake, as much as 100 to 1,000 times. All 15 major macro and micro nutrients available in soil are absorbed and transferred to the plant.  Nitrogen and phosphorus are contributed by bacteria and shuttled to the plant through the network of filaments.

Using photosynthesis the plant then converts these building blocks into carbohydrates. This process nourishes both plant and fungi. The fungi cannot produce carbohydrates so the symbiosis is essential for survival. Nutrients are shared within the system and can be diverted to ailing members. Scientists believe that the network of mycorrhizal fungi, plants, and soil bacteria can encompass an entire forested area. 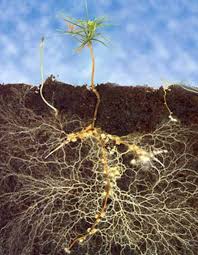 Mycorrhizal fungi also contribute protection to the plant by bio-balancing pathogens. The covering of mycorrhizal filaments acts as a physical barrier. Exudates are secreted by the fungi to bio-balance disease-causing organisms.

Why Do We Need Mycorrhizal Fungi?

A benefit of the presence of mycorrhizal fungi is increased soil porosity and improved soil structure. Tightly bound nutrients such as nitrogen, phosphorus, and iron are dissolved by enzymes the fungi release into the soil. Mycorrhizae improve soil structure in two ways. First, the fungal filaments help hold soil together.  Second, the fungi excrete glomalin, a sticky substance that binds soil together. These actions allow for increased soil porosity, aeration, water movements in addition to erosion resistance. 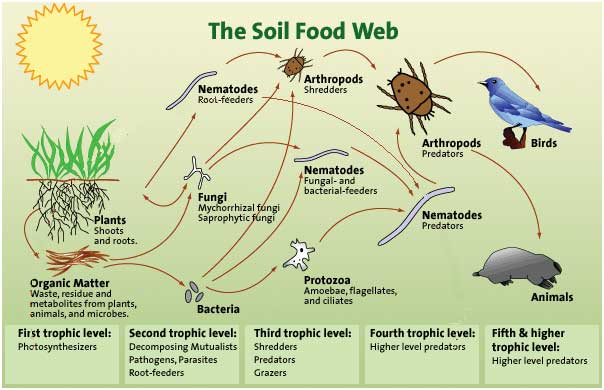 Many common agricultural practices have reduced or eliminated the presence of mycorrhizal fungi. Irrigation, top soil removal, tillage, erosion, road and home construction, fumigation, and the introduction of non-native plants all contribute to the loss of mycorrhizae in soil.  Commercial applications of mycorrhizae have been developed to combat the effects of today’s man-made environments featuring compacted soil, the loss of top soil, and the absence of necessary organic matter.  Botanists often amend soil with mycorrhizal fungi as it known to increase rooting generation, drought resistance, salt tolerance, crop yields, and reductions in transplant shock. Mycorrhizal plants fare better under drought conditions than plants without a fungal relationship.

Not every plant needs mycorrhizal fungi in the same way. As there are a myriad plant species so are there thousands of fungal species. Each fungus excels in its own way, be it improving soil or capturing nutrients. The dependence of the plant on mycorrhizal fungi depends on its own capabilities and environment. Some plants need a mycorrhizal relationship to survive while others merely need it during times of stress. It is clear that without the mycorrhizal relationship the Earth’s flora would be a mere whisper of its potential.